From the State of New York Conservation Department 1932 (Adirondack Campsites):

Fish Creek Pond is considered by many the finest and most attractive of all Adirondack campsites. Certainly it has few equals and no superiors. It embraces more than two miles of the shore line of the pond, providing campsites directly on the water for everyone. The sandy, well drained soil and the moderate shade of white birches and red pines makes this site an ideal one during wet weather. A fine beach runs almost the entire length of the campsite and bathhouses have been provided for transients. The location of this campsite in one of the best watered regions of the Adirondacks makes boating very popular. Boats may be hired nearby and one may embark at the campsite and explore more than a dozen bodies of water and return without once touching land. State Highway Route 10 passes the campsite. 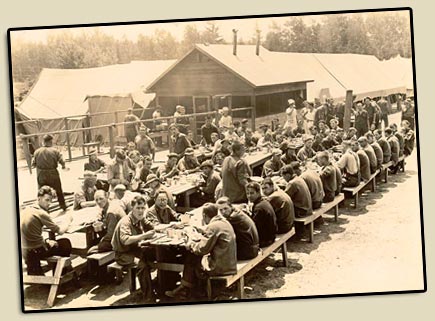 In the wake of the State highway came the demand for camping sites. Some of them, like the site on Fish Creek Pond, have fine water frontage, with scores of open fireplaces made as foolproof as possible. They tempt thousands of campers, many of whom spend their entire vacations there at a nominal expense. Those who care to get away from the crowds can always load their boats or canoes with duffle and find a camp site of their own, fare from the highway.

Fish Creek was originally opened in 1920 by the Conservation Commission with an open camp lean-to and fire rings.

The original open camp had a half dozen fireplaces covering approximately 1/4 of an acre (NYT).

In 1926 campsites were established at designated areas with 20 tent sites in total along with sanitary facilities and a well.

In 1926 the parents of Robert Hickok (late husband of Carolyn Hickok, owner of the current Hickok's Boat Livery) set up shop at the campsite at Fish Creek where the current beach is. Robert's father built 99 flat-bottomed wood boats, which he called "the little red boats." They could support tiny motors, but were primarily rowboats. Hickoks operated their livery at Fish Creek until the beach was moved in the early 1960's. (source Adirondack Daily Express July 1, 2009)

In 1927 the campground was doubled in size to approximately 40 sites with 1,888 campers registered.

In 1928 the campground was again doubled in size to approximately 80 sites.

A 1928 Conservation Department report crowed, "Many people consider Fish Creek Pond the ideal camping spot in the Adirondacks and there is much to justify their opinion. The fact that it has grown from one open camp and a few fireplaces covering an area of perhaps a quarter of an acre early in the present decade to a city of tents having a shore frontage of one and a half miles during the past summer is sufficient evidence of its attractions and popularity."

1,400 tourists visited the Fish Creek campsite one day recently. This breaks all June records for use of a conservation campsite in the district. (source Tupper Lake Herald Aug 14, 1930)

in 1933 permanent barracks were to be developed at Fish Creek Pond CCC camp 8 with 16 buildings to be built to accommodate officers quarters and to provide housing for 240 men. (source Norwood News Oct 4, 1933)

In 1935 the park was enlarged again by the Conservation Commission.

Monday night is "Tupper Lake " night at the White Birches (FIsh Creek). Musicians and story tellers from Tupper join in at "Uncle Louie's" camp fire and take an active part in the program held in the auditorium that is erected by the CCC and seats 1000 persons (source Tupper Lake Free Press Aug 15, 1935)

In 1936 Mr. Marvin Wilson was the camp naturalist at Fish Creek Pond.

In 1936 campers were allowed to camp free! The theory was that the forest preserves belong to the people. Of the Adirondack cmaps, the largest and most popular is that at Fish Creek Pond, north of Tupper Lake, It extends for four and a half miles around the shore of two ponds, each site having shore frontage under a canopy of white birch trees. During July and AUgust this camp has a populartion of aoubt 2,500 (source NYT Ju.e 1, 1936)

Fish Creek has a population of about 2,500 during July and August and represents a good cross section of the US and Canada. Evening entertainment arranged by the campers themselves and held in a large outdoor amphitheatre is a popular feature of the campsite. (source Tupper Lake Fee Press May 28, 1936).

In the 1940's, sites 250 and 251 had wooden platforms erect on them complete with tents. These were reserved for forest rangers or camp employees on vcation. Later in the 1950's the platforms were removed and the sites became available to the general public. (source Glen Peters).

In the late 1950's the only potable water was obtained from a hand pump located near site C8. Campers would go there every morning for water (source Kevin Kirsch).

During the 1950's there used to be platform camps in the area from site 200 to 230. These could be rented for the entire season. There were also platform camps on Follensby Clear Pond and up in Floodwood and Little Square Pond (source Kevin Kirsch).

In 1951 Rollins Pond was opened to keep up with the ever increasing demand for campsites, with the original plans being completed in 1955.

In 1951 Fish Creek and Rollins Pond would close for the season on November 25th. (source Tupper Lake Free Press Oct 4, 1951)

In 1952 they expected camper total for the season to hit the 150,000 mark before the campsite closed on September 15th. Peak demand for campsites was reached in late July and early August, when no vacancy signs were out daily and hundreds of visitors had to be sent elsewhere. Up to Labor Day, 175 campsites were still occupied.(source Tupper Lake Free Press Sep 4, 1952).

In 1955 attendance at Fish Creek comes in at 232,144 and campsite fees total $11,900. Attendance was up 95,000 compared to last year. Donald Bousquet was superintendant. Rollins accommodated 18,445 visitors an increase of nearly 8,000 over the previous year. $55,000 had been expended in developing the Rollins Pond campsite near Floodwood. Fish Creek had 367 campsites at this time. The cost of staffing and maintaining Fish Creek for the season ran about $8,600. (source Tuypper Lake Free Press and HeraldSep 8, 1955)

In 1956 the Tupper Lake town Democratic chairman petitioned the Conservation Department to restore the Cross Clearing campsite to relieve pressure on Fish Creek where campers frequently had to wait in line for hours for a vacancy. (source Tupper Lake Free Press Mar 4, 1981 - flashback).

In 1956 the proposal to re-open the Cross Clearing Campsite to relieve pressure on Fish Creek was struck down as the Rollins Pond expansion in 1956 was expected to be completed mid-summer providing a total of 200 campsites at Rollins. (source Adirondack Daily Express May 23, 1956).

In 1958 Rollins Pond was expanded to keep up with demand.

In 1960 it was reported that during July and August there were dozens of cars waiting most every day for sites to be vacated. (source Tupper Lake Free Press Nov 3, 1960)

In 1975 Fish Creek is offered as 100% advanced reservations, Rollins 20%. While state wide, public campsite usage averages 68%, Fish Creek operates at 95% capacity. Fish Creek has a capacity of 1,483 individuals on its 353 sites. In 1974 it registered 33,236 campers and had to turn away 2,566 people. The major explanation for the unparalleled popularity of this one campground is that it has access to Upper Saranac Lake and has a good view out over the water. Fish Creek is one of only 6 other state parks that has showers.

Harold Beckman was the year round caretaker at Fish Creek between 1977 and 1986 (source Press Republican Jan 3, 1981)

In 1993 the Paul Smiths Cub Scouts and another in Lake Clearmade about $6,000 a year by collecting empties at the Fish Creek and Rollins Pond recycling areas. (source Adirondack Enterprise Apr 28, 1993)

In 1994 the DEC ran a Beginner Campers program that would loan potential campers an array of gear, virtually everything you would need except food. The staff would help setup a tent and establish the campsite (whatever that meant). Cost was $15 plus a $1.50 registration charge. This was the fourth year this program had been running at Fish Creek as well as Mongaup. The Beginner Camper program ran from Memorial Day to Labour Day. (source Newsday July 17, 1994)

The original natural beach was located at approximately where sites 67-77 are today. It was later relocated to its currently location around 1969-1971. During the years of the old beach, Hickock's Boat Livery would be granted a permit each season to run their boat livery services on the site of the current beach. Once the beach was moved, Hickock's was revoked further permits at which time they aquired the property they currently own on the other side of the bridge on Route 30. Carolyn Hickock can still be found working over at the Livery with her son Robert. Carolyn grew up spending her summers living on one of the old tent platforms back in the 1930's.

NOTE! If you or someone you know has any additional information on the history of Fish Creek and 'The Birches', please email me at dave@campadk.com. Any info would be greatly appreciated!

You may also want to watch the Fish Creek Historic Postcard Show and the NY State Photo Archive of Fish Creek from 1916 to 1934.

A work in progress.... Certainly much more coming!

Special thanks goes out to Steve Collins for providing various postcards from his extensive collection, for use on the site.

Join in the converstion and meet other Fish Creek Campers here on the forum!

Enjoy over 40 high definition videos taken at Fish Creek and the surrounding areas. Over 5 hours of footage!

Integrates various tools all in one place complete with campsite guide, photos, map, availability. Set and save your preferences, and campsite favorites.

Ranger Jill can answer ANY question you might have along with showing you relate photos and links, all in real time. You might ask 'how many people on a campsite?' or 'show me site 100'. She talks too!

Select from over 150 high resolution images for your desktop computer! Next best thing to being there.

Check out hundreds of photos of Fish Creek & activities in the area.

Camping at Fish Creek? Be sure to add your trip to the Campers Calendar.